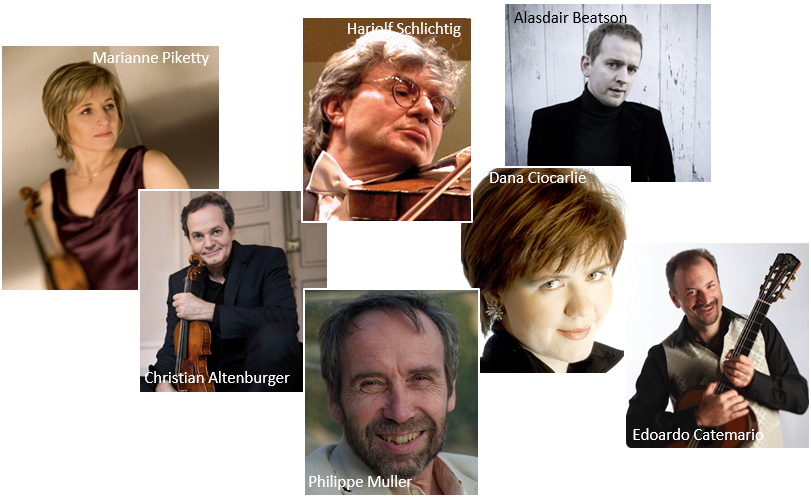 This year we wanted to cover all the aristic heritage from Mirecourt, meaning the stringed instrument making. Therefore, to mix bowed strings and plucked strings, we invited the Italian guitarist Edoardo Catemario.

We have also established a partnership with the CH de Ravenel. The opening concert was proposed in the Ravenel Auditorium and presented 3 songs by the vocal group Itinér'air (volunteers from the Ravenel Hospital) accompanied by a strings instrument quatuor.

In 2015, another driver was to promote the Rencontres Internationales de Musique outside the Mirecourt area to share these awsome musical moments with an extended number of people. Therefore a concert was played in the Music School of Neufchâteau.

A strong link between professionals and amateurs has been built during concerts where students and teachers from the music school of Mirecourt have participated, as well as during master-classes, meetings and share of best practices between luthiers and musicians.

This first concert of the 2015 edition was special as it was a unique partnership with the Ravenel Hospital.

The Vocal Group Itinér’air, under the direction of Christine Tricarri opened the program with three songs. They were accompanied by the Adult Vocal Group of the Music School of Mirecourt and by a quatuor which members where teachers from the music school and Marianne Piketty. 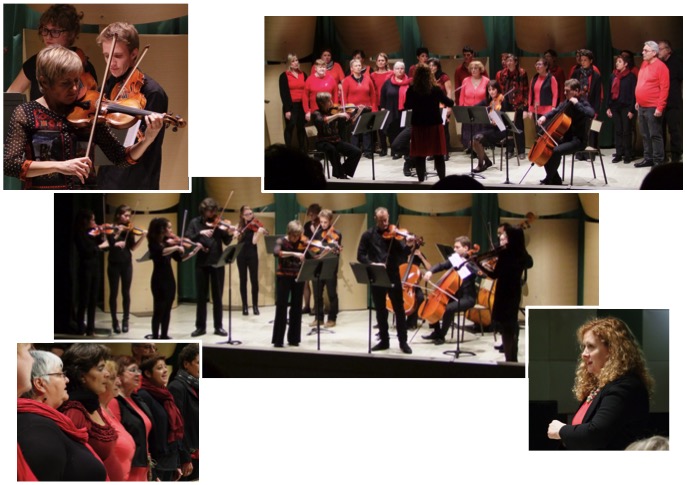 The emotion on stage and in the audience was very high. The music gathered valid and disabled people who cheered the artists in an unique standing ovation.

This year, on of the drivers was to promote the Rencontres Internationales de Musique outside the Mirecourt area to share these awsome musical moments with an extended number of people. Therefore a concert was played in the Music School of Neufchâteau. 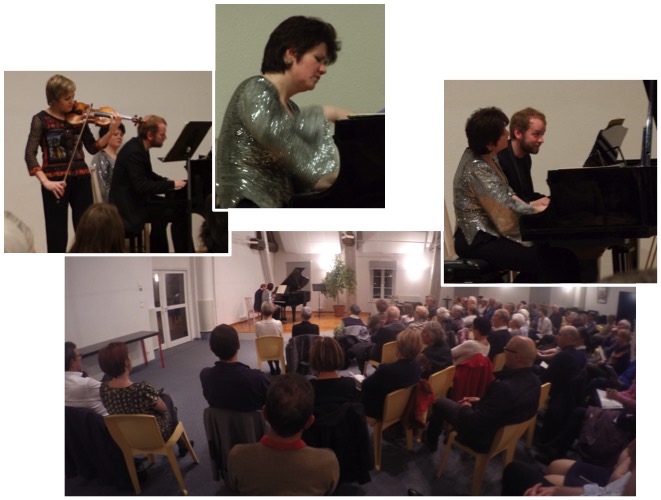 This concert highlighted the piano and showed the virtuosity and complicity of the pianists, especially during amazing four hand pieces. 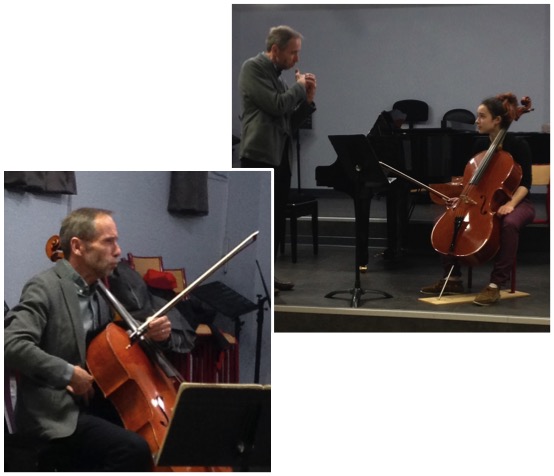 It is in this intimate place where Aurélien Pascal entered in the festival. Aurélien is a young and very talented cello player who has been sponsored this year to be provide with the opportunity to play major chamber music pieces with world knowed musicians. 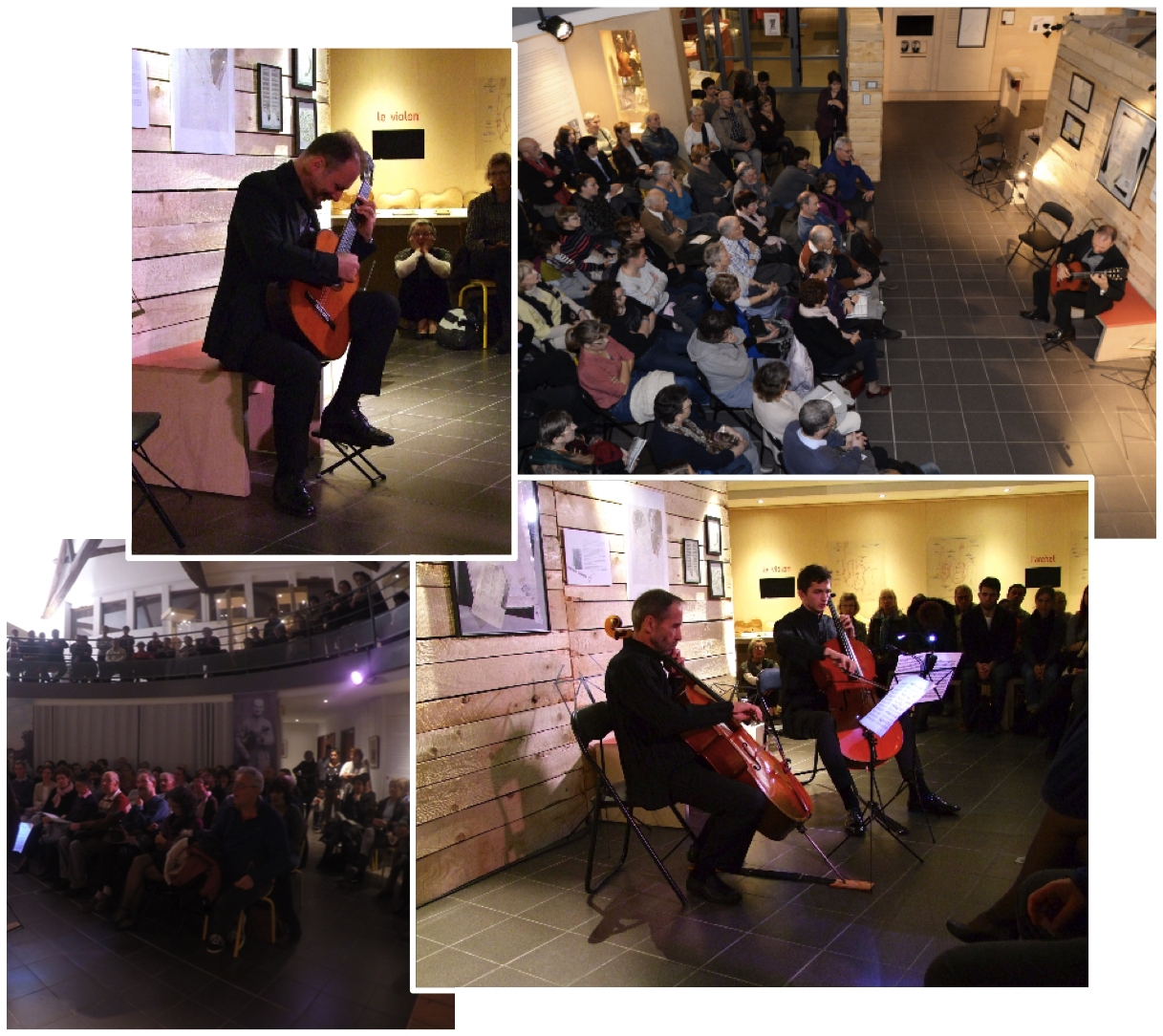 It was an evidence that some space had to be managed in the agenda to provide the opportunity to the violin making students and teachers to share experience and best practices with the artists. 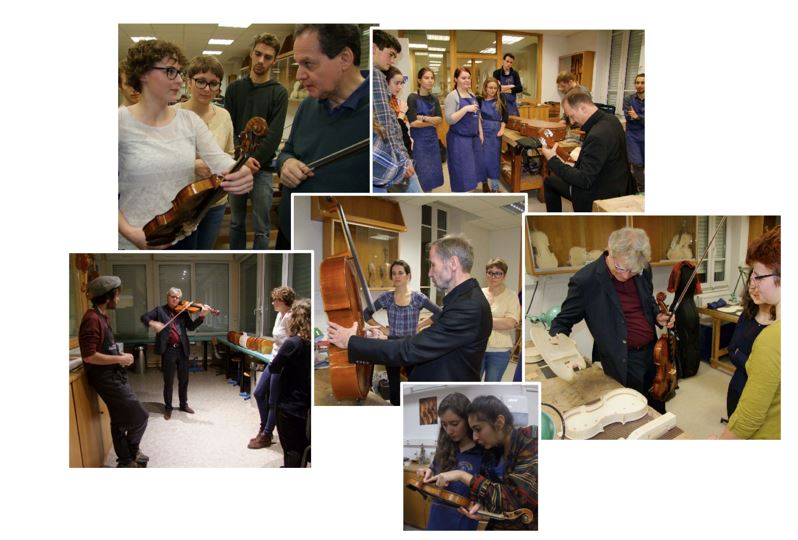 This year we wanted to cover all the aristic heritage from Mirecourt: the stringed instrument making. Therefore, to mix bowed strings and plucked strings, we invited the Italian guitarist Edoardo Catemario.

During this concert nine senior students from the music school (some of them are also string instrument maker students) and four music teachers joined the artists on stage. It was a real challenge for these young amateurs to play with international artists. 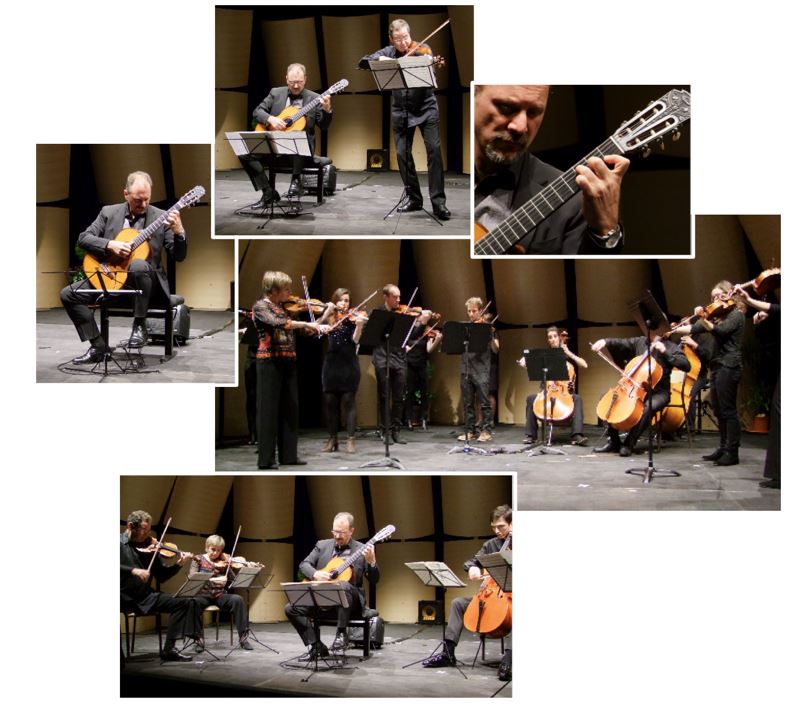 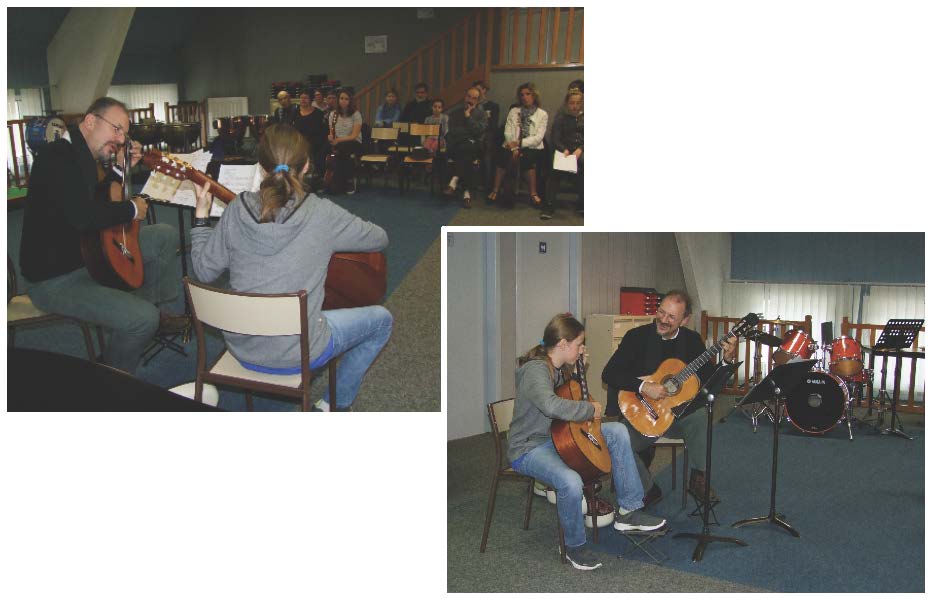 Two pieces encouraging reflexion and reverence with their very deep and slow sounds have been played during this concert. They have been composed during the second world war, the first La sonate n°2 opus 244 by Darius Milhaud in 1944 and the second Louange à l’éternité de Jésus by Olivier Messian in 1940 when he was prisoner in the concentration camp of Görlitz. Emotion was at the highest as the audience inevitably made the parallel with the tragic events that occured the day before in Paris. 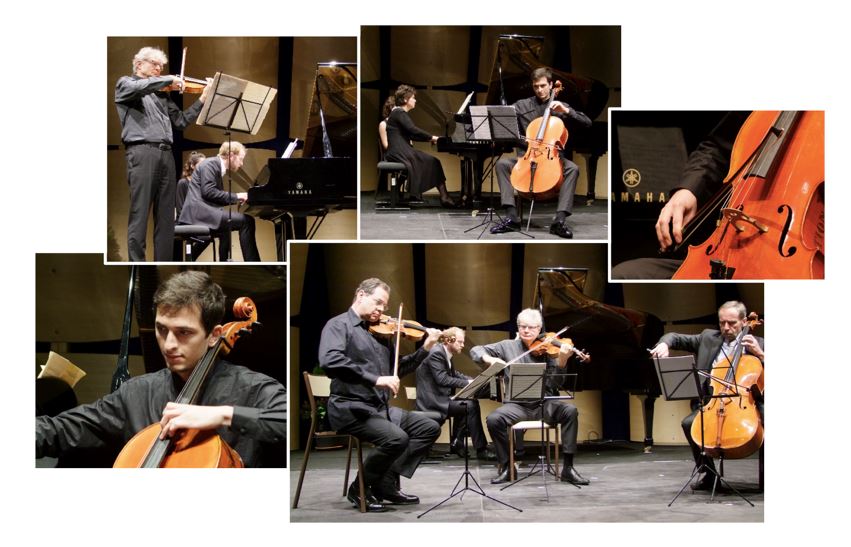 This concert was intended to be festive but it has finally been transformed in a resounding tribute to the victims of the terrorist attacks in Paris and their families. 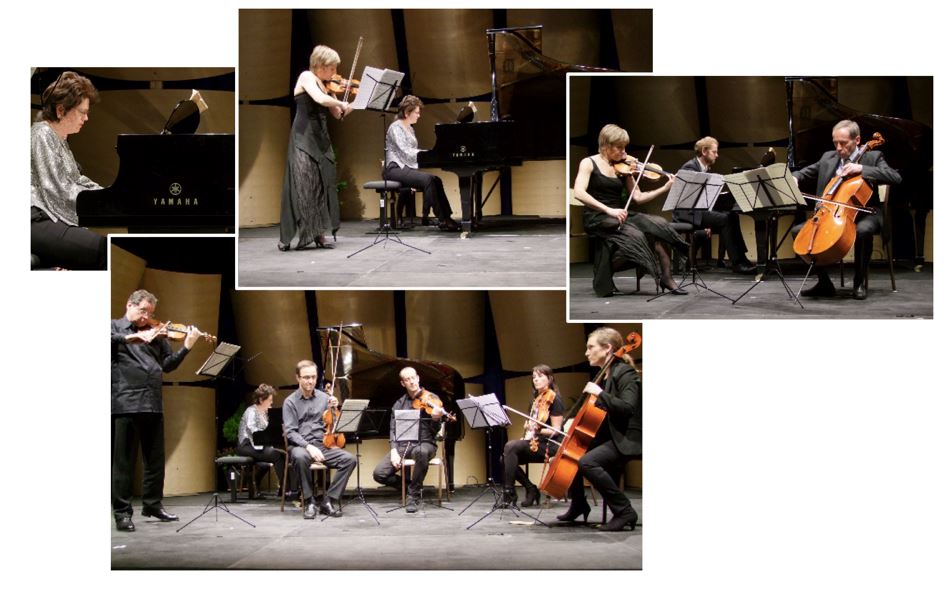 The Concert Op 21 from Chausson was the opportunity to build a partnership with Laurent Causse and some teachers of the Music School of Mirecourt.

The 7th International Musical Meeting of Mirecourt finished with the Quintette from Pierné which closed this concert and the festival. This concert was an outstanding moment. The generosity of the artist was highly above all expectations. 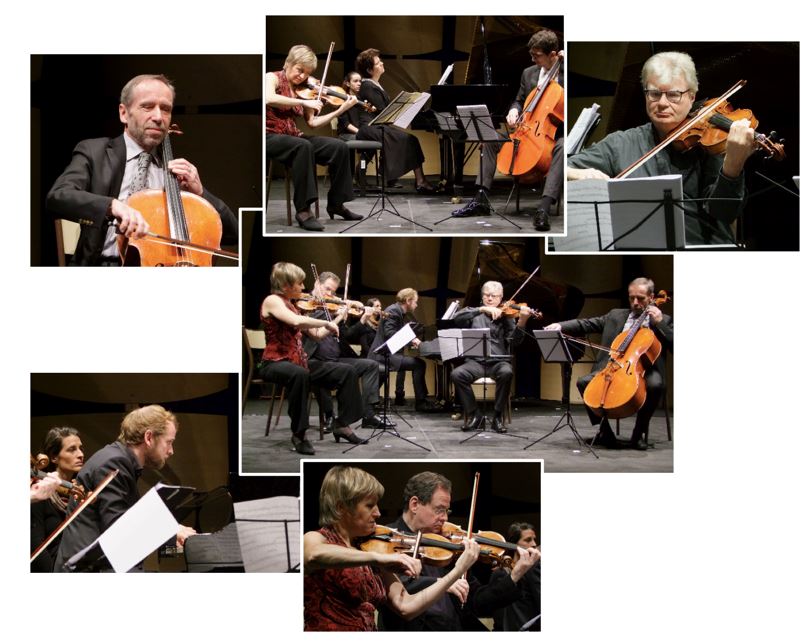 Globally we can say that all eight artists present in Mirecourt during this week were remarkable at all levels: presence and quality on stage, availability and generosity with the audience, the organizers, the students and the teachers.

Thank you for the great week in Mirecourt! You are a fantastic host!!! You made a warm and friendly atmosphere, merci mille fois !

Many thanks for an exciting and very enjoyable week, - I had a great time! And congratulation on all your work that made this festival grow and become very special.